Newly released records show even ideologically aligned state attorneys general offices privately voiced concerns from the beginning of the abusive campaign to use anti-racketeering laws and other investigations to silence political opposition to the President’s climate agenda, a campaign spearheaded by New York Attorney General Eric Schneiderman. The unease was found even among AGs personally recruited to the crusade by Schneiderman’s office.

Emails just released by the Energy & Environment Legal Institute (E&E Legal) capture these concerns. One AG’s office, which bailed on Schneiderman, characterized him internally as a “wild card” after the March 28, 2016 organizational meeting in New York City. Other records just released show AG offices requesting that Schneiderman’s team back off of its rhetorical overreach about their efforts to date.  Still more seek restraint in touting the prospects that others would join in “investigations” Schneiderman called for using the AGs’ law enforcement powers to target dozens of conservative organizations and think tanks.

One email from Schneiderman’s office to another AG office acknowledges it received several requests to tone down its claims.  Yet, at the time of the March 29, 2016 Schneiderman-led press conference with former Vice President Al Gore, Schneiderman’s press office released a press release announcing “an unprecedented coalition of top law enforcement officials committed to aggressively protecting and building upon the recent progress the United States has made in combatting climate change.” An InsideClimate News headline blared, “Climate Fraud Investigation of Exxon Draws Attention of 17 Attorneys General.” The Houston Chronicle reported “Multiple state probes into whether Exxon Mobil misled its investors and the public on climate change could expand to other fossil fuel companies.” A New York Times article stated, “Exxon Mobil Climate Change Inquiry in New York Gains Allies”

These stories resulted from continued Schneiderman hype of his support among peers which was difficult to swallow even at the time of the press conference. Politico, for one, reported on some of the concerns by AG offices. “A coalition of Democratic attorneys general on Tuesday promised new scrutiny of the fossil fuel industry, but most fell short of committing to investigations into whether companies like ExxonMobil deceived the public about the threat of climate change,” the Politico article began.

These newly released emails reveal how numerous of Schneiderman’s recruits had concerns with joining his investigation. Now, nearly five months later, the Schneiderman campaign has gone from the “Green 20”, or seventeen AGs depending on the report, down to apparently just Eric Schneiderman. As #ExxonKnew ringleader Bill McKibben stated in June, “Exxon is not really facing a blitzkrieg. Only two states have really had the courage to take on

[Exxon].” Even this glosses over the inconvenient fact that the Virgin Islands AG was forced to withdraw his subpoena after targeting nearly 100 conservative groups and think tanks. “They were in over their head. They were going to get pounded and it’s good they are off the field,” Pat Parenteau, an environmental law professor at the Vermont Law School, said of the Virgin Islands AG’s investigation. Massachusetts AG Maura Healey, the only other AG to officially announce an investigation, has put hers on hold.

“These emails help explain why Schneiderman found himself going from seventeen Doppelgängers one day, to being almost completely alone within mere weeks of his bombastic ‘publicity stunt‘ press conference with former Vice President Gore,” said Chris Horner, Senior Legal Fellow for E&E Legal. “His untethered political crusade was just too much for even like-minded activist AGs he personally selected. We now know they saw the warning signs early.”

In Their Own Words: AGs Retreat From Schneiderman

Since the announcement of the AG coalition in March, the Schneiderman-led campaign has suffered multiple setbacks, with the likes of the US Virgin Islands walking back their own investigation and Healey’s investigation put on ice. What these emails show, however, is that the AG offices were themselves expressing skepticism and concerns about the investigation, and its leader – so much so that the press conference had to evolve from talking up investigations to talking about shared political, “climate” goals.

The Iowa and Delaware attorneys general offices originally participated in the scheming, but told Politico in July that they declined to sign on to Schneiderman’s campaign after being briefed by environmental activists ahead of the press conference. It was Iowa’s Deputy Attorney General Tam Ormiston who sent an illuminating note back to his colleague in Des Moines immediately following the March 28 “happy hour” hosted by Schneiderman’s office to discuss their plans.

In a Monday March 28, 2016 email sent at 8:40 pm to the Iowa Attorney General’s Communications Director Geoff Greenwood, Ormiston wrote, “I just returned from the evening’s activities. I will update you tomorrow but clearly Eric is himself the wild card for all.”

This came three days after the first Iowa OAG email showing unease with Schneiderman’s scheme, sent the evening of Friday March 25 to Ormiston from another colleague, Subject: AG Climate Change Release for 3/29. In it, Ormiston’s co-worker wrote “Tam — Just talked with Tom [Miller, Iowa AG]. He thinks we may be locked in on this and have to ride it through.”

Ride it through Iowa’s AG did, until immediately after the get-together to announce this inherently political campaign cloaked in the abuse of public law-enforcement office.  The scheme was too much for Iowa’s Miller, and the March 30 email from Schneiderman’s office laying out the accepted division of labor shows Iowa had volunteered for neither work group (Exxon/Fossil Fuel Company Investigations, or Roadblocks to Renewables, as shown in a previous release from an earlier E&E Legal open records production). 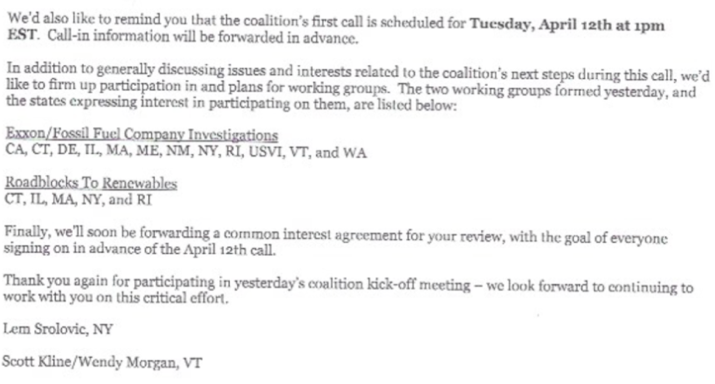 Other emails from the Virginia and Vermont OAGs express concern, respectively, with Schneiderman’s overstatement both of reality and of likely participation in his scheme.  Vermont objected to the Schneiderman effort to get other AGs to agree to “return documents of which we have taken possession under our state law [without being] ordered by a court to do so”, and also the suggestion that it “[tak[e] on an affirmative obligation to always litigate” requests for public records relating to the scheme. 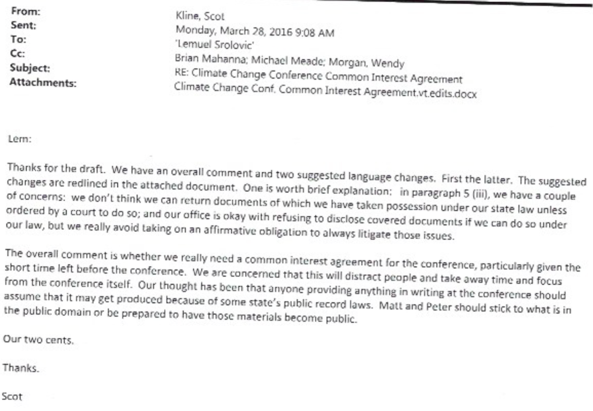 Before the March press conference, the office of the Virginia AG expressed anxiety that a draft press release suggested the AGs would be working together on investigations. “At this point, we don’t know what we’re going to agree to, or really what Virginia’s laws and our authorities could allow us to do, so it makes me nervous to say we’ve ‘agreed to work together on key investigations,'” wrote Michael Kelly, the Director of Communications for the Virginia AG. “Is there any room to dial that back one notch?” he asked. 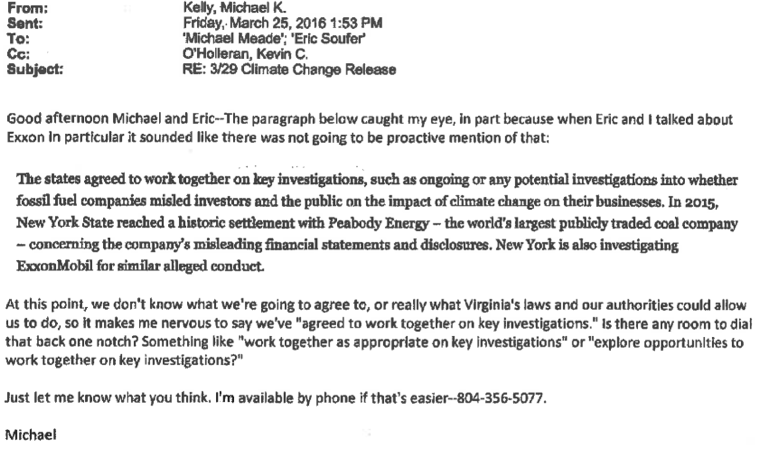 Schneiderman’s office acknowledged it had been hearing concerns about that bombast from other offices as well.  Now, months later, most or maybe even all of the originally participating AGs appear to have backed away from any interest in using racketeering laws against political opponents of their climate agenda. Indeed, even at the onset the Vermont OAG suggested the entire event should be scaled back to avoid publicity and instead focus on allowing the state AGs to learn more about the legal basis for Schneiderman’s investigation. Obviously that idea was scrapped when it was made clear that the entire investigation is part of a public witch-hunt to intimidate Schneiderman’s ideological opponents.

The Vermont AG’s office isn’t alone in questioning the legal basis for or propriety of Schneiderman’s campaign. Just this week, Columbia Law Professor Merritt Fox wrote in the National Law Review to express doubt that Schneiderman’s investigation would find any evidence of fraud. “It is really about the attorney general acting as a champion in the fight against global warming,” Fox wrote.

These newly released emails show the other state AGs were getting cold feet even before the March 29 press conference announcing their coalition. It began with email exchanges showing concern for Schneiderman’s penchant for PR bombast, which they had to “ride out”, to noting Schneiderman himself was the “wild card” for anyone going along with his scheme.

Schneiderman’s handpicked AG partners sensed early on that they were props to bolster the ranks within his crusade, and they began to distance themselves, after first urging his office to focus more on the facts and less on the optics. The coalition has struggled to hold itself together from the moment it was announced, with allied AGs refusing to sign on to the division of labor, then the purported, if obviously improper “Common Interest Agreement”, then drifting away from the crumbling coalition.

Instead of his political targets deceiving the public, it is Eric Schneiderman who has misled his supporters into thinking his investigation was widely supported — that is, viewed as credible, and as he sold it — by his peers in his own coalition. “Today we’re sending a message that at least some of us, actually a lot of us in state government are prepared to step into this battle,” Schneiderman said in March.  In fact, most of his allies were wary of publicly aligning themselves with Schneiderman at all, let alone hitching their wagons to his star.  The investigations began with Schneiderman and in just five short months he has watched his support collapse, such that he once again stands alone in his crusade to harass his political opponents under the guise of upholding the law.