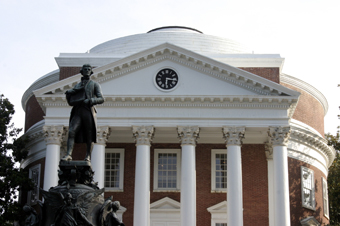 In January 2011, E&E Legal (under it’s old name) filed a FOIA request with the University of Virginia for e-mails of Dr. Michael Mann, the author of the infamous and widely-discredited “hockey stick” that claimed to show little variability in global temperatures from 1000AD until the middle of the 18th century, with temperatures rising dramatically after that period. The FOIA request also asked for the e-mails of more than 30 other global warming scientists who participated in Dr. Mann’s research, as well as the data used to support their conclusions.  The FOIA requests were joined by Virginia Delegate and three Virginia taxpayers.

These emails and other documents relate to claims made by Dr. Michael Mann to obtain, and claim payment under, certain taxpayer-funded grants. Mann, currently at Pennsylvania State University, worked at the UVA’s Department of Environmental Sciences when he produced what was hailed at the time as the ‘smoking gun’ affirming the theory of catastrophic man-made global warming. Despite that lofty honorific, persistent controversy led promoters of this notorious ‘Hockey Stick’ graph (principally, the UN’s Intergovernmental Panel on Climate Change or ‘IPCC’) to stop advancing it as serious work.

When the University of Virginia declined to provide the e-mails, citing academic freedom, E&E Legal went to court to force them to release the e-mails. Dr. Mann and several of his alarmist colleagues have sought to join the suit as interested parties, and are fighting to oppose allowing the public to see the data and the research-related e-mails.

In response to a previous FOIA request, UVA had denied these records existed. But during the course of Attorney General Ken Cuccinelli’s pre-investigation under the Virginia Fraud Against Taxpayers Act (“FATA”), a 2007 law passed unanimously by Virginia’s legislature that clearly covers the work of taxpayer-funded academics, UVA dropped this stance. Court records reveal that counsel for the University has indicated instead that the Mann-related records do in fact exist, on a backup server. To avoid University delay or claims for huge search fees, today’s request specifically directs the school to search that server.  A second FOIA request was also filed in January 2011 seeking donor records of University of Virginia in response to Attorney General Kenneth Cuccinelli’s investigation.

The trial court held that every email E&E Legal sought can be withheld because the University owns it.  This decision is a set-up to have the Virginia Supreme Court decide the issue and E&E Legal has placed the case before the Supreme Court.  It is awaiting a briefing schedule that will allow the Court to define the extent of the research data exemption behind which UVA hides.  E&E Legal will argue that the marketplace for ideas is not very different from the marketplace for goods and services, and unless the emails give UVA a competitive advantage over other researchers, they must be released.

One of the things that have been disclosed as a result of our FOIA request is that researchers at the University of Virginia apparently did not keep research logs, which are crucial to allowing other scientists to reproduce and confirm the original work. Without these logs, the credibility of climate change research conducted by Dr. Mann and his colleagues is seriously diminished.