Earlier this month, the Environmental Protection Agency (EPA) finalized its regulations on carbon dioxide emissions for existing electricity generating units, which the agency calls the “Clean Power Plan.” EPA claims the alleged benefits of the rule significantly outweigh the costs, and is requesting that states submit plans to implement the rule. Nevertheless, this rule—supposedly a “historic” step in the Obama Administration’s fight against climate change—will have no tangible impact on global warming. Furthermore, although at first glance the cost-benefit analysis by the agency appears favorable, the purported “benefits” are inflated and misleading. Thus, before saddling their constituents with large costs and minimal benefits, states should reject EPA’s call for implementation plans and avoid prematurely executing the rule before legal challenges are resolved…

While EPA claims that the rule will prevent a projected 3,600 premature deaths annually in 2030 and 90,000 asthma attacks in children, EPA’s health claims ignore the relationship between wealth and health. Specifically, when people become poorer, they also tend to become sicker. This is well established in health and economics literature. In the past, EPA has recognized the connection between “people’s wealth and health status”, and even found that “if the costs are large enough, these increased risks might be greater than the direct risk-reduction benefits of the regulation.”

However, EPA doesn’t consider the health-wealth link when justifying this regulation. In order to calculate its estimates of mortality benefits, EPA uses the value of statistical life (VSL) approach, which assesses that every income loss of $10.1 million ($US 2011) leads to one premature death.[xi]… 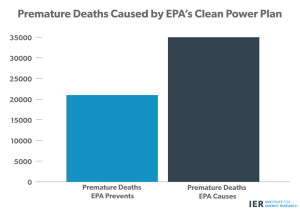