by James Murphy
The New American

A new report compiled by the European Union’s Copernicus Climate Change Service (C3S) is leading to the use of fainting couches all over the media. The report claims that 2022 was the fifth-hottest year on record and that the eight warmest years on record have occurred since 2014. According to the report, 2016 remains the hottest year ever recorded.

Or, as The New York Times breathlessly reported: “The world remained firmly in warming’s grip last year, with extreme summer temperatures in Europe, China and elsewhere contributing to 2022 being the fifth-hottest year on record, European climate researchers said this week.”… 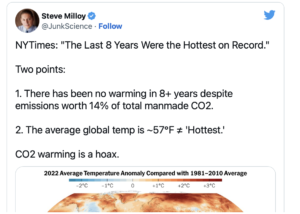 Forget the fact that temperatures from 1850-1900 were not measured in the same way that they are now, and that global data is largely nonexistent for most of the world during that time period. It’s much warmer now, so stop asking questions!