As the media-created “phenom” Greta Thunberg neared the shores of New York in her yacht to deliver more hot air about how the world’s going to hell in a hand-basket, E&E Legal’s Steve Milloy and CEI’s Myron Ebell released a report reminding people that catastrophic weather predictions are nothing new.  Titled, Wrong Again: 50 Years of Failed Eco-pocalyptic Predictions, the CE-released report is a walk down memory land that clearly shows dire weather predictions have been used for at least half a century by Globalists in an attempt to control one of the most important resources in our lives and that’s of course energy.

As the report notes:

Modern doom-sayers have been predicting climate and environmental disaster since the 1960s. They continue to do so today. None of the apocalyptic predictions with due dates as of today have come true.

The document then includes a series of newspaper clippings starting in 1967 with a snapshot of the prediction of the day.  For example, in 1967, the scare was a ‘”Dire famine by 1975.” 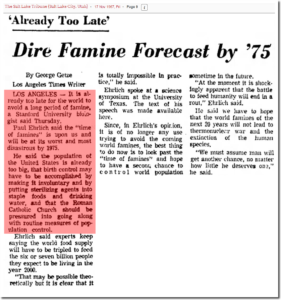 By 1970, death by famine was replaced with predictions of a coming ice age, which would rock the world by the year 2000.  Publications throughout the early 1970s ramped up the rhetoric about this impending devastating cool-front, which included Time jumping into the fray. 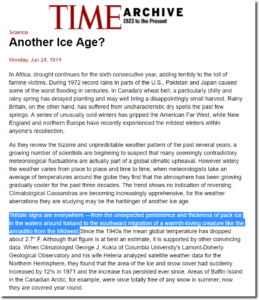 Ozone depletion, acid rain, droughts, famines, and endless summers carried this weather-disaster narrative into the late 1980s. The Miami News is a typical story of the era. 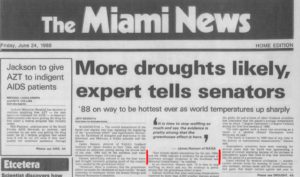 By 1989, as the report notes, an impending ice age was replaced by global warming and rising sea levels.  It will happen so quickly that even the Globalists’ cherished United Nations would be underwater by the year 2000 the Associated Press declared.

As the actual weather continued to frustrate the powers-that-shouldn’t- be since none of the horrible predictions came anywhere close to becoming a reality, “global warming” was replaced with the one-size-fits-all “climate change.”  This perfect moniker to slap on any weather situation has been the operating tagline ever since.

Despite the overwhelming evidence of false predictions and baseless scare tactic, as so clearly presented in the CEI report, the Globalists and their complicit media show no signs of relenting.  This is their chosen tactic for controlling one of the most important resources known to mankind – one that has the greatest impact on our species in human history.

Since their bought-and-paid-for scientists have failed so miserably in sounding the alarm bell and achieving their much-desired worldwide control of energy, they turned to a 16-year old child from Sweden.  There is nothing organic about her rise to “environmental prophetess,” she is simply a media creation who is being used as a human shield to push a Leftist-socialist agenda.  The way they pumped her up is sickening, and reading accounts of her sail across the Atlantic in a modern-day yacht makes it sound like she’s as brave as the Pilgrims who made the same journey in 1620.

She’s the perfect foil when you don’t have the truth on your side, or so they believe.  Who would dare speak out against her, she’s a teenager?!

Well, Steve Milloy for one.  He was one of the first critics to step into the fray and challenge her credentials and absurd statements as the following Tweet illustrated: 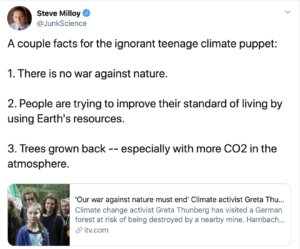 Of course, Milloy’s comments set the media into a frenzy.  How could anyone be so callous and call out a young girl?!  Their double-standard is transparent as they relentlessly push a narrative people aren’t buying.

Greta will return to Sweden and hopefully to life as a normal teenager who uses an enormous amount of energy connecting through social media.  And we will all wait to see what the next dire weather prediction the corporate media has in store for us.